On Friday, April 13, our friends, families and supporters gathered at Brookside Golf Course for the Han-Schneider International Children’s Foundation’s 5thAnnual Sam Han Classic golf tournament. With over 80 golfers in attendance, the event was kicked off with cold refreshments and a BBQ. Each golfer received a goodie bag which included a cooling towel, divot fixer, tees, balls and snacks. The golf tournament began as we sent out the 20 teams to their designated holes. 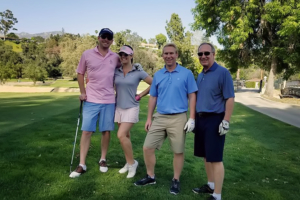 While out on the course, the golfers were greeted by our amazing volunteers who were stationed at the contest holes. This year the tournament featured both a male and female long distance drive, a closest to the pin, and three hole-in-one holes with the biggest prize being $10,000.00 cash. While no one was able to capture that elusive ace, all teams thoroughly enjoyed the day of good shots, bad shots and over-exaggerated drives. 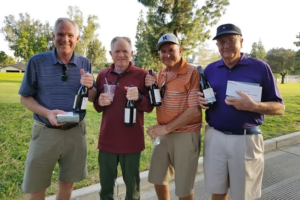 When all the scorecards were tallied – one team proved better that day – Larry Pastre, Gary Klein, Jim Shearer and Ken Peterson were crowned the 5thAnnual Sam Han Classic champions with a team score of (-9). The winners each walked away with a box of balls, a bottle of wine, and a $100 gift certificate to Taekwon Korean BBQ. However, the real winners were the children in our programs. The 5th Annual Sam Han Classic raised nearly $18,000 to support our food an education initiatives in Cambodia, Mexico and Tanzania.

The event helped mark two special occasions to the foundation – first, our fifth year of hosting the Annual Sam Han Classic charity golf tournament; second, our 10 year anniversary in keeping Sam Han’s legacy of love burning bright. Both were big accomplishments but at the end of the day we realize it is you, our donors, whose compassion and generosity have allowed us to reach these milestones. On behalf of our organization, our partners who tirelessly work abroad, and the children we serve – a heartfelt thank you for all that you continue to do.

No images available at the moment