On June 16, the Han-Schneider International Children’s Foundation hosted the 4th Annual Sam Han Classic charity golf tournament. This year’s tournament had a change in scenery and was held at Brookside Golf Course. The switch of venues paid off with this year’s tournament drawing a record number of participants – 95 golfers of varying skill levels.  The 4th Annual Sam Han Classic kicked off at 1pm to allow our supporters to get a work day in.  We also switched from a post-tournament reception to a pre-tournament barbecue, which was met with great enthusiasm.

Each golfer received a goodie bag filled with a HSICF branded golf towel, coozie, balls and tees.  They were also automatically entered into the three in-tournament contests consisting of a long drive competition, closest to the pin and the featured $10,000 cash hole-in-one sponsored by the Riboli Family Wines of San Antonio Winery.  This year, the Sam Han Classic introduced a bull’s eye contest where players could wager $5 to win 1, 2, or 3 raffle tickets depending on where their ball landed in the bull’s eye. 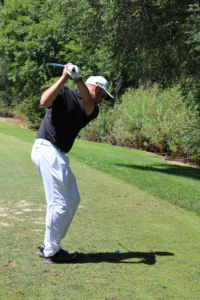 Even in the midst of a heat wave, the Arroyo Seco, where Brookside is nestled, provided our golfers a nice, cooling breeze. The tournament also provided all participants with unlimited refreshments throughout the course donated by Classic Distribution and Tsingtao Beer.
When the scorecards were added up the team of: Jordan Lopez, Evan Richardson, Reed Henderson and Manny Olaiz took the much coveted championship bobblehead trophies along with a several other prizes with a team score of 54 (-16).

Raising nearly $20,000, our ongoing programs under Operation B.O.O.K., will continue to flourish by further developing our educational and nourishment programs for children across the globe. The 7,500 children and orphans we serve will receive daily education along meals to keep them active and provide a healthy lifestyle.

Thank you to all of our sponsors and participants who made the 4th Annual Sam Han Classic the biggest and most successful tournament to date. Our children are truly fortunate to have a family like you!