The Han-Schneider International Children’s Foundation hosted its first charity poker tournament on November 18 at the Greenbar Distillery in the Arts District of Downtown LA which was attended by over 90 supporters and friends. The evening started with cocktail hour where our guests enjoyed small bites and an open bar. Before the tournament officially kicked off, Arthur Han and Zachary Lopez spoke about milestone achievements and the impact the foundation was making on their Operation B.O.O.K program, which serves over 5200 orphans and children around the globe with educational and nourishment programs. A heartfelt video presentation on their most recent mission trip to Mexico was also showcased. 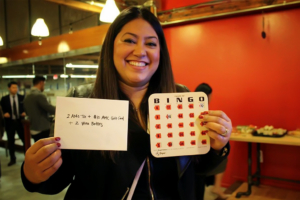 The tournament kicked off shortly after on the distillery floor amongst the copper stills and barrels that made this such a unique venue. The tournament allowed for re-buys, and a one-time, special add-on to allow those knocked out early to still have a chance to win it all.

As the players were busy on the distillery floor, attendees in the Diamond Lounge were treated to wine tastings from San Antonio Winery and complimentary bingo games to win prizes.

The final table was spotlighted in the diamond lounge where all guests watched in excitement to see who would win the poker tournament and the grand prize of a one week stay in Cabo San Lucas. When the dust settled and the final hand had been dealt, our inaugural Charity Poker Tournament winner David Yang was crowned. While the top four players took home prizes, it was our children who were the real champions that night. The evening raised over $10,000 for our programs in Cambodia, Mexico and Tanzania.

Thank you to all our sponsors, donors and all guests who made this event a success!